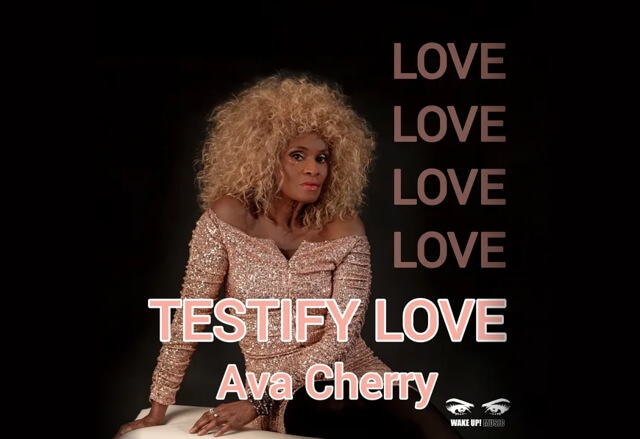 Multitalented describes Ava Cherry, the singer, songwriter, model and actress who was brought up in Woodlawn, in the South side of Chicago. Her mother worked for the administration department of the Playboy organisation, while her father worked for the Post Office and played the trumpet. Growing up, Ava Cherry inherited her father’s love of music.

Soul was her favourite and especially the music being released by Motown during its sixties heyday. Gladys Knight was one of her favourite vocalists, and another was the Queen of Soul Aretha Franklin. Little did Ava Cherry realise that a few short years later she would be rubbing shoulders with these two greats.

This was a dream come true, and a far cry from when she used to make her way to the Regal Theater, on the South side of Chicago on a Sunday afternoon. Each week, she watched some of the biggest singers and bands take to the stage and wish she was up there.

By 1972, Ava Cherry nineteen, and an aspiring model living in New York and working at the Genesis nightclub. One day, her manager told her that David Bowie was going to perform at Radio City and gave her a copy of the Ziggy Stardust to listen to. Little did she know as listened to the album that she would soon meet Bowie and her life would be changed forevermore.

Ava Cherry was at a Stevie Wonder after party where she rubbed shoulders with Gladys Knight and Aretha Franklin.

That night, Ava Cherry was introduced to David Bowie who invited her to tour Japan with him.

Having learnt the songs on Ziggy Stardust and Aladdin Sane, Ava was ready to leave for Japan when she heard that David Bowie was unwell and the tour had been cancelled. This was a devastating blow.

Not long after this, she was invited by a friend to spend some time in Monaco, in the south of France. While she was there, Ava travelled to Paris where she started looking for David Bowie. Eventually, the pair were reunited after a year, and spent time in the south of France, and later, London.

That was where Ava Cherry recorded People From Bad Homes during November 1973, which was produced by David Bowie who penned four songs and sang on I Am Divine. The Bowie penned songs were joined by covers of songs by Bruce Springsteen, Frank Zappa and Roy Harper. Sadly, Ava Cherry and The Astronettes’ debut album People From Bad Homes wasn’t released until 1995. By then, Ava was an established artist.

Between 1974 and 1978, Ava Cherry was one of David Bowie’s backing vocalists. Ava, Luther Vandross and Robin Clark accompanied Bowie live and in the studio. This included on one of his classic album ‘Young Americans’ which was influenced by Philly Soul. It was released in 1974, and Ava played her part in the sound and success of what was one of his finest albums of the seventies.

After her relationship with Bowie ended, Ava Cherry returned to the Chicago, where she was introduced to another musical legend, Curtis Mayfield. He signed her to his Curtom label and produced the single Love Is Good News, which Ava cowrote with him. This was the start of a solo career which has spanned five decades.

In 1980, Ava Cherry released what is regarded as the finest album of her solo career so far, Ripe!!! It was produced by Curtis Mayfield, Bobby “Electronic” Eli and Gil Askey and was the album that launched Ava Cherry’s solo career.

Three years later, in 1983, she released the much-anticipated Streetcar Named Desire on Capitol Records. It was well received by critics and was the latest chapter in Ava Cherry’s career.

Still Ava Cherry found to release solo albums including Picture Me in 1986, which was her swansong for Capitol Records.

After this, Ava Cherry has continued to record and release singles and albums. This included the belated release of People From Bad Homes in 1995 and The Astronettes Sessions in 2009. Since then, the multitalented musical chameleon hasn’t stood still and has been working with a variety of high profile producers on different projects. Two of her most recent releases are Right From The Heart and That’s How Loneliness Goes. Both tracks show how Ava Cherry’s music has evolved during the fifth decade of a long and illustrious career.

Recently, a new chapter in Ava Cherry’s career began when she signed to Pepper Gomez’s Chicago-Miami based record label Wake Up! Music. 2020 promises to be an exciting year for Ava Cherry and Wake Up! Music as she releases her much-anticipated first album of Nu music.